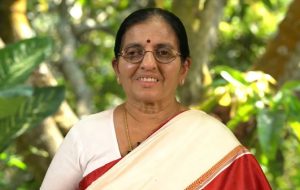 Dr. R Nagarathna is the Medical Director of Arogyadhama, the Holistic Health Care Center at Prashanti Kuteeram, Bengaluru. Having mastered Yoga, she combines the best of the east (Ancient Indian Traditional System – Yoga) with best of the west (Modern Medicine System – Allopathy) for treating even acute cases of non-communicable diseases such as Asthma, Heart disease, Cancer. Apart from being Medical Director, as an Academician, she has been guiding many PhD Students of S-VYASA.