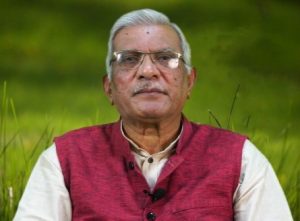 N.V. Raghuram, Founder chairman and spiritual guide of “YOGABHARATI USA”, Founder chairman of “DISHA BHARAT” Bengaluru is a student of yoga and spirituality from the early childhood. During the days of engineering studies, he had clarity that he would work for about ten years to earn his livelihood and the rest of the time he can pursue and give spiritual knowledge to the needy.

Accordingly, he worked as engineer in various sectors for little more than ten years before he resigned from the job.

In 1977 he attended Vivekananda Kendra, Kanyakumari to have deeper knowledge of yoga, and vedanta from ASN Sastry. From 1980 until 2015 he was honorary volunteer for VYASA and sVYASA University Bengaluru. he started Kendra centers in his work places wherever he was posted.

Since 1990 Raghuram has been traveling all around the globe (more than 50 countries) for the past three decades guiding research projects Teacher training programs and retreats in England, Germany Turkey, Japan, China and USA. Most fascinating work is in the Muslim country Turkey where he has more than 300 yoga teachers trained by him and working in several cities. They also have been initiated into mantra and meditation.